Tour Details  (red plus Cappadocia tour)
The guide will pick you up from your hotel, enjoy the most beautiful panoramic view of the Göreme region and have enough time to take pictures. In the meantime, your guide will give you detailed information about the environment.

You will then visit the Underground City, which has many in the area. There are multiple levels connected by narrow tunnels. You will visit churches, wineries, kitchens, and other sections open to visitors. As you tour the sections, your guide will give you detailed information about the Underground City.

Then enjoy a local lunch in an authentic restaurant. Then visit the Güvercinlik Valley, located in the town of Uçhisar, and offers another magnificent panoramic view. The next destination is Göreme Open Air Museum, where you can see the rock-carved churches carved by early Christian monks. Your guide will tell you about Christianity and Cappadocia Monastic Life.

The next stop will be the Old Greek Village Çavuşin and Avanos, abandoned after the Population Exchange in 1924.
Cavusin is one of the ancient settlements of the early Christians, which has the oldest church in the region dating back to the 3rd century.
Avanos is located on the banks of the Kizilirmak, Turkey's longest river. It is famous for its pottery that has been made since the Hittite period. Here you will visit a pottery workshop and learn about red clay work and ceramics. One of the ceramic masters will show you the old freehand technique used throughout history. You can try it too.

Then you will visit Paşabağı, where magnificent mushroom-shaped rock formations can be seen. Paşabağı is also known as the Monks Valley because of the Saint Simon's Chapel located in the valley. The next stop is Devrent Valley, also known as Dream Valley. In the valley, you will see the silhouette of Virgin Mary and interesting red rock formations, some of which resemble animal forms. It is possible to see rocks resembling a camel, a lizard, an owl, a snake, a chicken and a penguin. 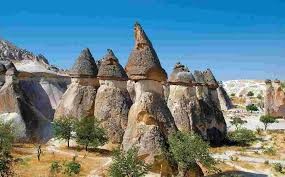 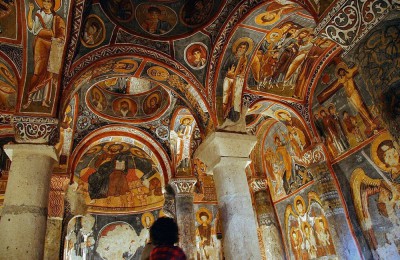